05/09/2016 10:11
According to the plan of the People's Committee of Can Tho City, The Fifth Southern Traditional Cake Festival 2016, hold by the Centre for Investigation – Trade Promotion and the Can Tho Exhibition Fair, will take place from October 15 to 19-04, (from 9 to 13-03 of lunar calendar), at the Cai Khe roundabout, Ninh Kieu district. 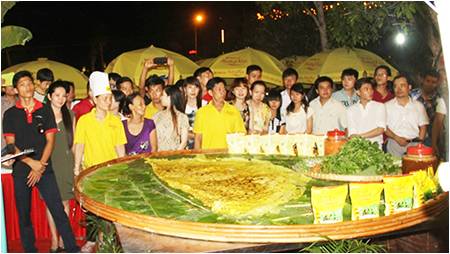 With many attractive activities, the Southern Traditional Cake Festival 2015 attracted about 160,000 visitors.

It is expected that the festival will have around 150 stalls including 80 stalls of traditional cake, 50 stalls of regional specialties, handicrafts and 20 international stalls, with the participation of artisans from provinces and cities in the country and companies from Japan, Korea, India ... 7 main activities to be held at the festival are: the opening night on  10-03 of lunar calendar, traditional cake exhibition, traditional cake baking contest, folk games, traditional amateur music and calligraphy performances, art performances every night and the closing night. In addition, there are many activities in response to the festival as street festivals, tourism and cuisine promotion in 9 districts of the city ...

After 4 times of organization, the Southern Traditional Cake Festival has become the cultural brand of Can Tho City on the occasion of death anniversary of King Hung. This year, the festival is directly guided by the Ministry of Culture, Sports and Tourism, the Ministry of Foreign Affairs and the People's Committee of Can Tho City, with the expectation of promoting tourism and trade for the city.

Source: Can Tho Newspaper - Translated by Ngoc Diep