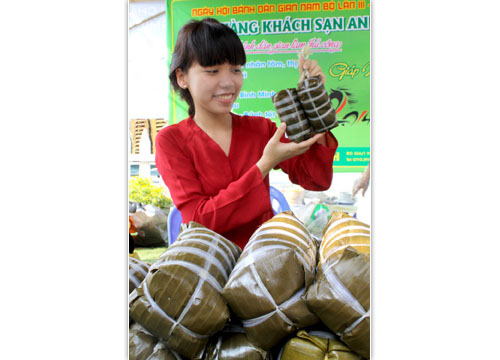 Introduction of Tet Cake in the 3rd Can Tho Southern Folk Cake Festival, Lunar New Year 2014

Accordingly, the Ministry of Culture agreed to expand Can Tho Southern Folk Cake Festival held on the occasion of King Hung’s death anniversary (March 10th lunar calendar) every year. Can Tho City plays an active role in choosing the festival venue, inviting regional and national provinces to participate in the event. Also, the Ministry requests that the the name of the festival be keep unchanged.

Can Tho  Southern Folk Cake Festival has  held three times since  Lunar New Year 2012 This demonstrates Can Tho’s efforts in preserving and promoting traditional values ​​culinary of the South, creating conditions for cultural exchange among ethnic communities in the Mekong Delta  and attracting tourists.

Souce : Can Tho Newspaper - Translated by Truong Thi Ngoc Diep