05/09/2016 09:53
Can Tho City has registered trademarks for 6 featured products of the Western area of the Mekong Delta. Among them is Com ruou Co Do - fermented glutinous rice - of Trung Thanh Commune, Co Do District. 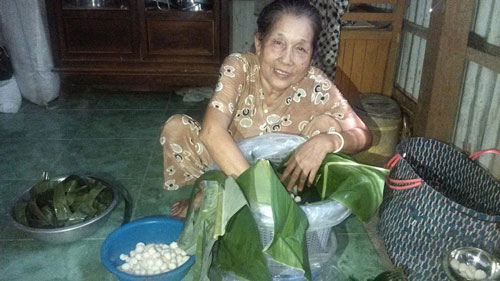 Trung Thanh fermented glutinous rice  is not only a featured product in the culinary culture and travel of Can Tho City but also a product of a traditional trade village which has been conserved for more than 50 years. Compared with other industries, fermented glutinous rice production does not bring high profits. However, with the mind and love for this trade, people of Trung Thanh commune have been attempting to conserve this unique product of sweet flavor which always reminds them of the beloved hometown.

Mrs.Dao started to love her career right after she got married. Her mother-in-law taught her this trade. Mrs. Dao makes Fermented glutinous fice by herself, brings it to everywhere to sell. She will bring her product to anywhere that people recommend to her.

The whole villagers conserve the trade

Along Ba Dang canal, from beginning to end of the village, we all saw pictures of spiraling smoke from the kitchen and smelled the distinctive fragrance of fermented glutinous rice. The fragrance of glutinous rice mixed with yeast flavor fascinated visitors from afar even though they had not enjoyed the dish. Despite many difficulties, this trade village with more than 90 households is still specializing in producing and consigning this product.

Having a strong attachment to this career for nearly half of her life, Mrs. Tran Thi Chin (65) said that fermented glutinous rice was not merely a dish but also a kind of remedy. It contains fermenting substance that helps the digestive system work more effectively.

Despite her old age, Mrs.Chin has never thought of giving this career up. "Whenever I’m healthy, I still do this. For me, fermented glutinous rice is a part of my life. I would feel uncomfortable if I did not make fermented glutinous rice anymore," said Mrs.Chin. Meanwhile, younger generation like Mrs.Phan Thi Tuyet Nhung (35) is very active when marketing the product in supermarkets.