A pristine area of coconut trees and large fruit gardens has made Ben Tre one of the nation’s precious green ecological complexes.

As one of the major agricultural suppliers in the Mekong Delta, Ben Tre is a province of fertile flatlands, extensive waterways, sand-hillocks, green paddy fields and lush orchards. Here, visitors have the chance to enjoy various agricultural produces, especially fruits such as coconut, durian, shaddock, etc.

The special feature of Ben Tre is the vast green orchards where visitors are allowed to pick fresh fruits from the trees and try as they want. Cultural and historical destinations such as Dua Religion Site, Tuyen Linh Pagoda and Dong Khoi Village are also well-known tourist attractions in Ben Tre.

Tuyen Linh Temple was built from bamboo in 1861 near the Tan Huong channel in Minh Duc, Mo Cay, Ben Tre. The temple was firstly named Tien Linh, and led by Abbot Khanh Phong.

In 1907, a monk name Le Khanh Hoa, an expert in Buddhism, was appointed to lead the temple and then in 1930, he renamed the temple “Tuyen Linh” with the term “Tuyen” referring to propaganda.

This place is famous not only because of the uniqueness of its design, but the historic events that happened here. The temple became a national historic site in 1994 and on May 19th of every year, there is a festival held here to celebrate the birth of Uncle Ho.

This was also the place that Nguyen Sinh Sac met Tran Van An, Huynh Khac Man and Le Van Phat, some of the first members of Ben Tre’s Communist Party.

During the two wars of resistance, the temple also hid and fed many members of the Communist Party, so that it was bombarded many times and badly damaged.  However, it has also been repaired many times and in 1999 was reconstructed on the original site.

In the future, a museum will be built at this temple to honor its remarkable history.

Cai Mon farming village also provides millions of breeding-tree types such as durian, mangosteen, sweet mango, seedless longan, langsat and varieties of citrus. There are also many graft and multiplication artisans who create the diversity of bonsai shapes with spectacular figures of deer, stag, dragon, phoenix, etc. The products are widely sold in Thu Duc, Bien Hoa, and exported to many Asian countries.

To tourists who want to discover the village of South feaure, Cai Mon is an ideal place where they can enjoy fresh fruits in any season of the year.

This spectacular place contains many wild forests with a great variety of trees including water coconut, date, mangrove, reed and Avicenna.

This is a favorite destination of many animals, especially birds, to which the region is dedicated.

There are about 84 species of birds in 35 classes, including 500,000 storks.  From April to October is the best time to see the storks, as this is when they take refuge in Vam Ho to produce and raise their young.

The birds can be seen during the day, but early evening after 5pm is the most exciting time to watch them.  At sunset, great flocks of storks thousands of members strong fly over the Ba Lai River to turn around under a glowing sky and land in the green forest.

The sound of thousands of birds playing, dancing and whooping becomes the enchanting song of the jungle.  In addition to the song of the storks are the varied rhythms and calls of other birds mixed with the sound of leaves, which makes a silent summer’s night shimmer with excitement.

Inside the Vam Ho Bird Sanctuary, visitors have a chance to travel around by boat, penetrate the submerged forest and step along narrow bamboo bridges to fill their chests with the purified air of a well-preserved wetland.

Also, travelers can rest under the shadow of the forest or visit relics of resistance from the Vietnamese – American War.

Lying far from the central of Ben Tre Township about 22km by waterway, Qui islet is a new land with wild beauty and many orchards. Tourists coming here will enjoy fresh fruits while listening to “don ca tai tu”- amateur folk music, a typical characteristic of Mekong Delta.

Qui Islet, the smallest islet in Ben Tre, is a sandbank with the area of 65 hectares in Tien Giang River, between 2 communes, Tan Thach and Quoi Son, of Chau Thanh district.

There are many orchards such as sapodila, longan, grapefruit, etc. As a new land, Qui islet is still wild. The violet-white cork flowers skim on water surface and sway lightly in the wind. Green nipas stretch along the river endlessly and flutter on the waves. The cottages loom in the orchards of heavy fruits. The country girls, who wearloose-fitting blouses, drive motor boats or paddle their fruits to market.

The restaurants are made of bamboo and nipa leaves. Visitors can enjoy popular special dishes here such as sour soup with pangasius krempfi, cork and spinach; red African carp steamed with termite castings and pumpkin flowers; anabas or pseudapocryptes elongatus or snakehead fish cooked in fish sauce on bowl.

Favored by good climate, with low rate of whirlwind and tropical typhoons, and all-year-round orchards, Ben Tre is considered appropriate to bee-keeping. Going on village paths in Chau Thanh, Giong Trom, Mo Cay and Cho Lach Districts, visitors can witness interesting scenes of honey vendors bustling and jostling along the way inviting visitors to buy or just taste their honey.

Making fine handicraft products is one of the characteristics of Ben Tre, because this is the homeland of coconut. In the hands of the dexterous worker-artists here, any single piece of coconut material may turn into fine items with great charm, such as animal statuettes, human face statuettes, etc.

Coconut candy is another kind of Ben Tre speciality and a traditional product, which is sold both in domestic stores and exported to many countries. Visitors can find these products mostly in Chau Thanh (Con Phung, Con Quy, An Hoa) and Giong Trom Districts. For coconut candy, visitors can go straight to buy directly from the makers on Dong Khoi Boulevard in the Township downtown. 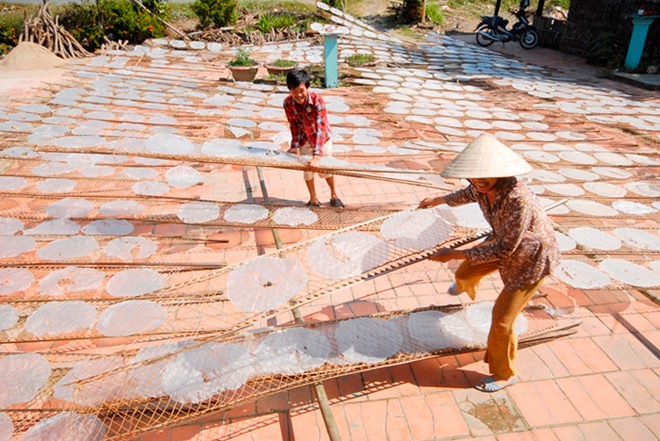 For the moment, the banh trang and banh phong (rice paper cakes) in My Long and Son Doc, Giong Trom District, are best known for their fine taste.

Though the main materials to make these cakes are husked rice and sticky rice, the makers of the cakes seem to hold their know-how in secret and are resolute in keeping them from being leaked to outsiders.

They are also keen to update secrets to produce finer and finer cakes to serve to modern customers around the world.

Phung Islet is on Tien River in Tan Thach, Chau Thanh, and only 12km from the center of Ben Tre City. The islet is famous for its lush array of fruits, especially coconuts, but also for the delicious specialty dishes of southeastern Vietnam.

Visitors can reach the islet by boat.  After taking their time on the islet, they can continue to ride along the river, visiting the handicraft and coconut candy factories, and disembark to catch a coach to tropical gardens.

Here they can rest under a canopy of coconut leaves, sip tea with fresh honey and blueberries, while listening to the beautiful melodies of traditional music.

Phung Islet is also known for holding the Relic of the Coconut Religion, which once spread over 1,500 km2 of Ben Tre.

The Coconut Religion (or Moderate religion) was created in the 1940s by Nguyen Thanh Nam. The main policy of this belief was to combine the essences of different religions such as Buddhism and Christianity, and pray for the good of all peoples and nations.

Fortunately, the relic remains intact on the 9 Dragons Ground, where cardinals would give speeches. There is also an enigmatic tower made from pieces of broken plates, bowls and cups of the followers.

Another special point about Phung islet is that the daily lives of residents are centered around making handicrafts from the coconut tree.

Visitors who come here can witness the process of making coconut candies and other souvenirs, and pick something to take home as a present.

Due to the high quality and specialty of coconut products on Phung Islet the prices are a bit higher than elsewhere, but this quality cannot be found anywhere else.

If travelers feel hungry, they can eat with local residents who will serve their everyday meal of simple but delicious foods. Weary travelers can also have a nap under the shadow of garden trees, or take part in exciting activities like photographing ostriches or watching crocodiles!

Oc Islet is the largest floating islet in the Ham Luong River, about 15 km away from Ben Tre City. It has a natural area of 647ha. Initially, it was only a little islet with many snails clinging on submerged plants on the alluvial bed; hence, it was called the snail islet.

Oc Islet is the home of many endemic species of fruit trees such as Num coconut, green skin … grapefruit of better quality than other regions.

Coming to Oc Islet, visitors can go sightseeing at unique coconut garden with different varieties and enjoy a well-ventilated space.

Tourists can meet “the old experienced farmer” Do Thanh Thuong (Tam Thuong) “Coconut King” who owns more than 20 varieties of coconut. He can talk abouttechniques to create high productivity with tourists who can also enjoy rustic country garden dishes.

The house is located in Dai Dien commune, Thanh Phu district. There is a beautiful large old house of Huynh clan. Though hundreds of years have passed, the house still conveys the character of the plains and the ancient splendor of a wealthy landlord.

The house is in airy space, with perimeter about 100 meters, including all 48 columns of precious wood such as ironwood. Many text columns are carved with ancient unique characters. In the worship room, there is a pair of vermillion lacquered and gilded wood panels.

The conch shell has an iridescent color of second-grade material. The roofs have tiles printed with folk activities such as chicken, crab, rice bundles, and shepherds riding buffalo.

The house has a unique architecture but now suffers from the erosion of time. Previously, the Dai Dien House was built witha front hall, back hall, but now the house just has the worship room.

The museum is set in an old yellow two-storey villa in French architectural style in Ben Tre with the museum front towards the river. It has the usual assortment of rusty weapons and war stuff, including an aircraft, a few bombs and field guns. There is also an interesting photographic display which includes a small archeological part but also a part dedicated to Vietnam’s revolutionary struggle.

In the centre of Ben Tre is the Vien Minh Pagoda, which is also the head office of the Buddhist Association of Ben Tre Province. In front of this pagoda you will see a large white statue of Quan The Am Bo That (goddess of mercy). The wooden shrine originally built here around 100 years agowas demolished to build this concrete and stone building between 1951 and 1958. One of the monks who lived here wrote the Chinese calligraphy that adorns the pagoda.